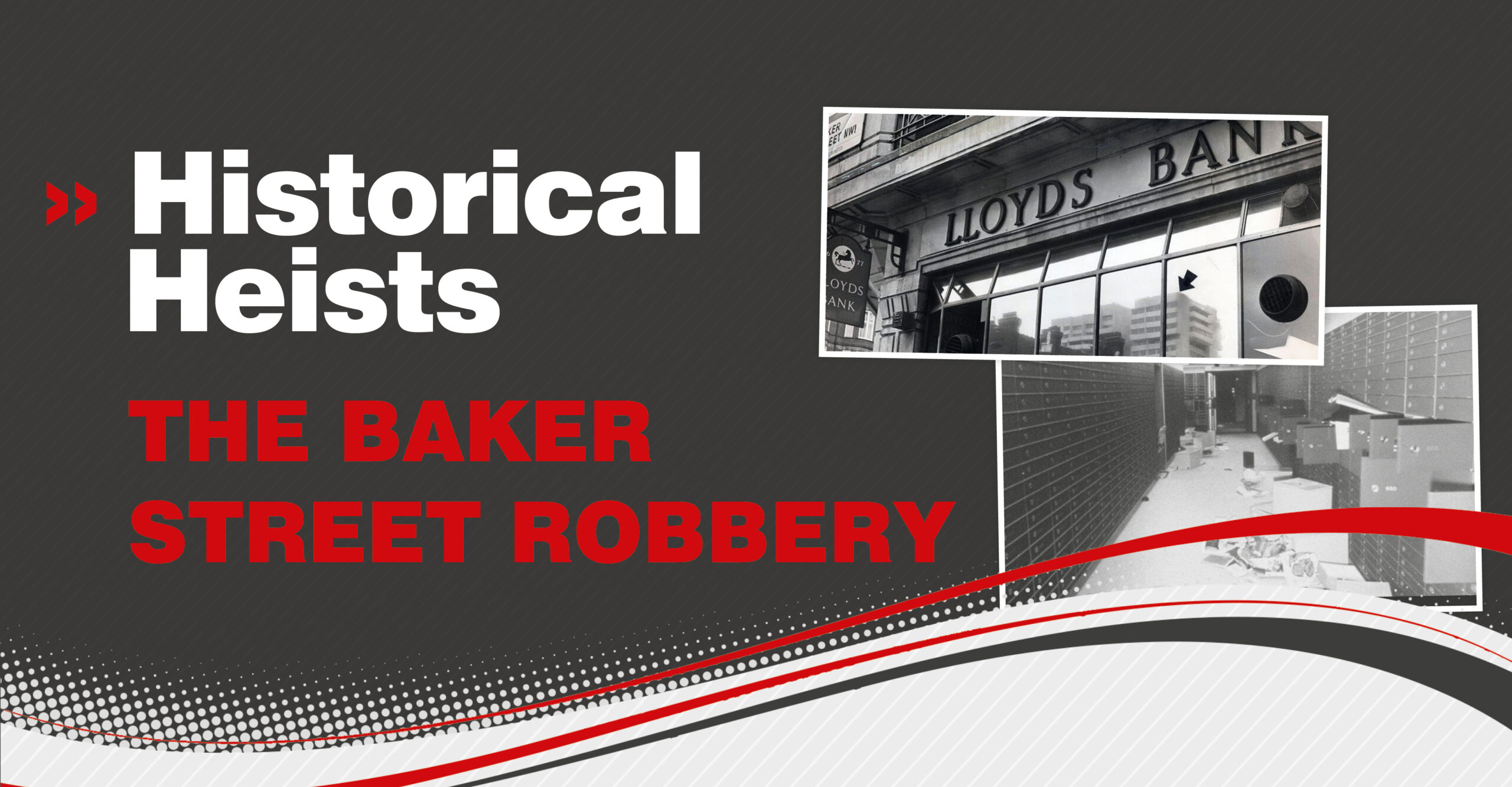 The Baker Street Robbery
is one of the most notorious bank heists in British history. With no alarms sounding
and no weapons, a team of intruders managed to steal nearly £3 million (estimated at $33.8 million today) in
cash and jewels and they were suspected to have taken royal family secrets too!

It was on September 11th 1971 when the robbery occurred and involved an underground tunnel and an explosive break in.

The mastermind Anthony “Tony” Gavin was the ringleader of the heist, who got the idea straight from Sherlock Holmes ‘The Red Handed League’. Gavin knew he couldn’t pull this off alone, so he enlisted some friends starting with Reg Tucker. Tucker opened a bank account at Baker Street’s Lloyds Bank and visited his deposit box on at least 13 separate occasions. The protocol in 1970 allowed customers to visit the deposit boxes alone with no staff near. Tucker was able to carry out the next phase of the operation unimpeded and plotted maps with exact measurements for the perfect layout of the vault room.

Gavin brought in alarms and explosives experts to help the with heist.

The bank was located two doors down from a leather goods shop which was going out of business and needed to be sold. One of the members of the heist, Benjamin Wolfe, rented the place for £10,000 which included the basement meant for storage.

Finally their work could really begin, they planned to dig from the basement of the building, passing through the Chicken Inn Restaurant, enabling them to get to the basement of Lloyds Bank. They dug for approximately 3 months and by 10th September 1971, the tunnel was complete.

Gavin later told the police he had lost 28 pounds just from digging.

On the day of the heist, a man named Robert Rowlands, a radio enthusiast, was listening to different radio waves when he came across the walkie talkies the men where using. He quickly realised this was a crime and called the police but they didn’t seem too worried. They advised him to record what he could hear, so Rowlands did. Upon listening, he got a sense of what was going on with one of them saying “whereas this way we have all got 300 grand to cut up when we come back in the morning.”

When Rowland’s knew for sure what was happening he called Scotland Yard to tell them all about what he had heard. Officers searched 750 banks the next day within a 10 mile radius of Rowland’s home.

On the morning of the 12th, the men were in the vault taking money whist the Police were on the other side. As the vault was tightly closed with a time sensitive locking system that wasn’t tampered with, they moved on. As it was Sunday and the banks were closed the manager didn’t find the aftermath until Monday morning.

Word quickly spread about the heist as many celebrities had safety deposit boxes with the bank that held private and even illegal belongings.

At the time it was labelled ‘The Walkie Talkie Robbery’ (as called on Radio 4), but only four days later the media coverage immediately stopped without explanation. The British government had ordered a ‘D notice’ to try and keep the story off the radar, but it had the opposite effect. Conspiracies surrounding the heist began to emerge and eventually led to rumours about Princess Margaret and gossip of extramarital affairs.

Princess Margaret received a lot of wanted and unwanted attention relating to her lavish lifestyle, including trips abroad with friends where they’re thought to have taken cameras.

A photo emerged many years after the robbery showing she’d courted a man 17 years younger than her and there were rumours of more. These photos are said to have ended up in the hands of Micheal X who rented a deposit box at the bank.

The hush hush nature of the story and the Governments involvement, led conspiracy theorists to believe it was all a cover up with exactly what was taken never being reported. This popular conspiracy was turned into a film in 2008 called ‘The Bank Job.’

It didn’t take too long for the police to catch up with the culprits. Wolfe had rented the leather shop in his own name so the police caught him straight away which lead to the arrests of Gavin, Stephens and Tucker not too long after.